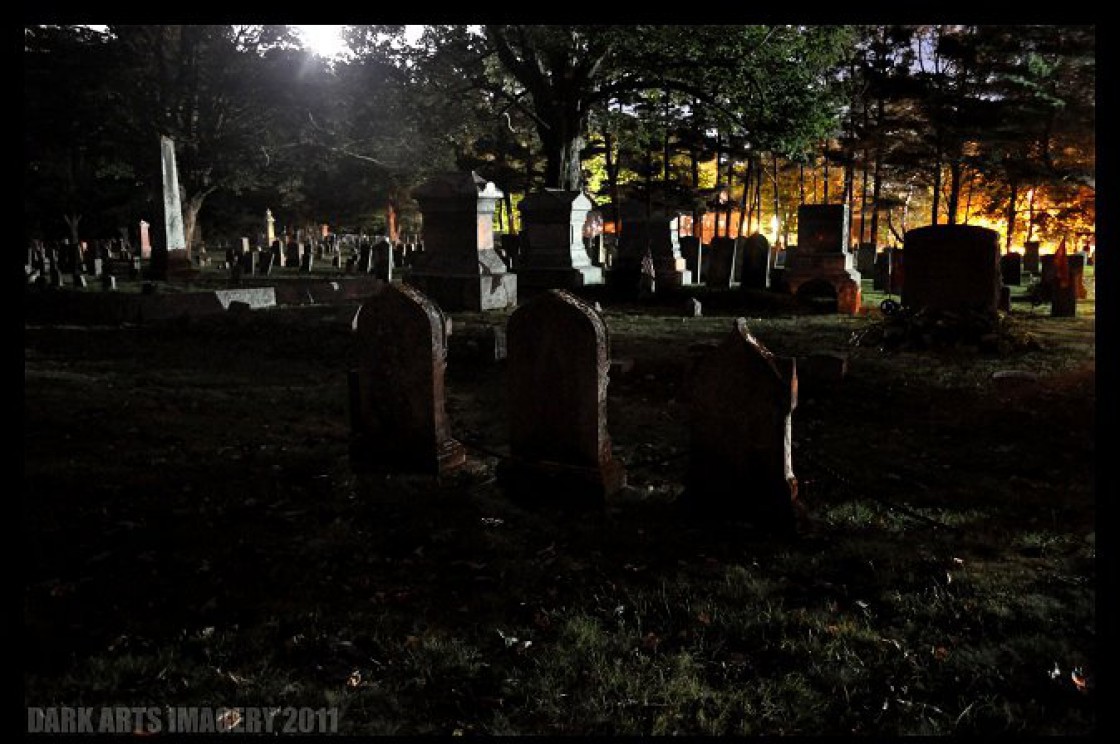 Say Bye-Bye to Your Dreams and Hello to Your Nightmares:
We Are Satan’s Puppets, Pawns in His Game

After I rang in 2017 with my first viewing of Rob Zombie’s new horror film, 31, I came away very disappointed, a feeling that did not sit well with me. Anyone who has read any of my previous reviews of his work knows that I am a huge Zombie fan, and that I can find the deeper meaning in his gore fests when many other people cannot see past the gore. So, of course, I watched 31 again—scene by scene, with a note book in my hand. With the second viewing I realized I had missed a lot of crucial dialogue and various nuances, and those details changed my perspective tremendously.
For those of you who have no idea what this film is about—31 follows a group of carnival workers who are kidnapped on Halloween and held hostage in “MurderWorld”—an isolated compound. They are thrown into a game called “31” where they are given twelve hours to try to survive against the attacks of a group of killers dressed as clowns. The back of the DVD case states, “ . . . the clowns aren’t the only ones they need to worry about—A grand scheme of Satanic rituals and a much more sadistic plot awakens.” This plot that awakens, well, it can be missed amidst all the crazy brutality and the tension instilled from the maddening chase scenes and shaky camera work. Now, it is time to look past the shock-fest—which Zombie creates like no other—and dig to the core of the story. Hold on tight and get ready to explore the horrors of the mind—and of the world. 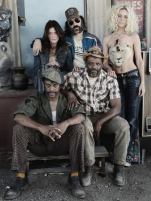 True fans of Zombie’s work will all attest to the fact that 31 brings us back to Zombie’s roots, gore galore in the crazy carnival of life. This film takes all of Zombie’s previous works and stitches them—with dull and rusty needles—all together in a tapestry of insanity. But amidst all that gore, there is a story being told. “We are all pawns in their game.”—this is what Schizo-Head (David Ury) says to Panda (Lawrence Hilton-Jacobs) when he is trying to buy himself time. Though he is purely a psychopath trying to give the illusion of similarity between himself and the victims, what Schizo-Head says is true in the bigger picture—the main idea Zombie is writing about. The rich and all-powerful devils of the world are in cahoots with Satan—pulling the strings of the lower classes, fucking with and destroying lives just because they can and because it amuses them; and, in the end, they make money off keeping us all down and out and struggling for survival. As the old saying goes: “The rich get richer and the poor get . . .” dead, especially if they are in a Zombie film. In a speech given by Father Murder (Malcolm McDowell) to the victims, he states that “. . . the dirtier you work, the luckier you get.” This statement takes on a double meaning in the film. On the surface, Father Murder is referring to the victims and the nature of how to survive the “31” game, but it also speaks volumes to the overall message in this tale: the rich and powerful devils of the world play the dirtiest—following Satan’s lead—which is why they are at the top of the socioeconomic ladder, wielding all the power.

An Amazon review posted on the official 31 website states this about the film: “If you want deep thoughts to ponder, get off the internet and read a book.” I completely disagree with this statement. Rob Zombie does not spoon feed the deeper meaning of his work to the viewers; he uses a lot of symbolism and makes you work to find the meaning. There is no easy link to click to give you the answers; oh no, Rob Zombie’s work makes you think—at least for those of you who can see past the gore. Zombie actually quotes Franz Kafka—from his personal notebooks—before the first scene even opens, and he refers to cockroaches—similar to Kafka’s story “The Metamorphosis” where the main character wakes up as a beetle-like insect—living after their heads are cut off. Kafka is a writer that makes you think very deeply, deeper than many are capable of thinking—or want to think—and the story behind 31 is very “Kafkaesque.” (This actually makes me wonder—how much of an overlap of Kafka and Zombie fans are out there? I know of at least one—me.) After reading many reviews of 31, it is apparent that many horror fans have missed the references, missed the core story. (Or maybe they just don’t give a fuck about the deeper meaning. I don’t know.) A deeper meaning is there, you just have to want to find it; you have to sink your hands into the blood and guts and pull out the heart of the story.
As for symbolism: I personally love the symbolism of the marionette scene, and the last minute decision to bring it back in the ending is a powerful statement. And the decision to end the movie outside on a bright and sunny day also comes across as symbolic; it gives Charly (Sheri Moon Zombie) the illusion that she survived the game. Illusions play a big role in this film. 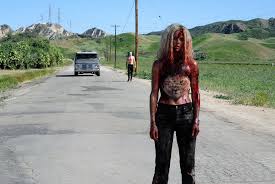 Then there is Doom-Head’s (Richard Brake) opening monologue, which is as rich with meaning as it is with pure horror and dread. Brake is phenomenal in this role. In his monologue he repeats the line “I ain’t no fucking clown.” His emphatic repetition of that statement emphasizes the fact that he resents having to dress like a clown, and that those who have hired him see him as a clown—He actually is “a grease-painted performer” eliciting “an amused response from an audience,” though he insists he is not. His audience consists of the rich and evil “mysterious folks who pay [him] a whole lotta scratch to do what [he does].” And the fact that he looks like he only weighs about a 120 pounds soaking wet adds to the idea of the weak ones having the most fight—another point Father Murder makes in the above mentioned speech. Doom-head is by no means weak; he is completely insane and brutal; though he insists that he is in control—a line that is all too often spoken by those who are truly psychotic. Not only does his mental instability keep control out of his hands, but so do the puppet strings. The killers and the victims are all in Satan’s great puppet show. Not only does Doom-Head’s opening monologue show how much he is also just another puppet of the rich, a puppet of Satan’s, but so does the magnificent scene when Doom-Head is pumping himself up to start the game. He repeats over and over—as he stares in the mirror at his clown-makeup—“I’m not crazy. I’m in control!” This is one of the best scenes in the whole film. It shows the true character of Doom-Head, and it shows yet another illusion.

Up to this point, it may seem like I am singing nothing but admiration for Zombie’s film, but that is not the case. While there is a lot about this film that I love, there is also a lot that I think is not working well. The biggest problem is that I do not feel an emotional connection to the victims. I am not allowed to know them enough in the beginning to care about what happens to them in the end. Zombie tries to show us how close they all are during the game they are thrown into, but it all comes in too late, which makes it feel forced. This is especially true when Levon (Kevin Jackson) dies in Panda’s arms, and again in the dinner scene when Panda is all torn up over his best friend’s murder. Maybe if the montage at the end of the film, which shows them as a tight-knit group of friends having fun times together on the road, was used in the beginning this would help show their familial-like relations, but even that may not be enough. Also, the use of the montage at the end is too much like the montage at the end of The Devil’s Rejects—though I do love how Zombie uses Charly’s bow at the end of her silly dance in the montage as her symbolic last bow from life. That is a nice touch.
One of my other issues with this film is Zombie’s use of the same talent he uses in his other films. I understand that Zombie is the type of writer that writes about a certain type of people, a certain class, as many writers do, but I hope he shakes it up a bit with his casting in the future. Writing about the same type of people, and then casting the same talent makes it feel like he is using the same characters, even though that is not the case. Don’t get me wrong—I do love Sheri Moon Zombie, Jeff Daniel Philips, and Meg Foster, but it is time for a change up. Even if Zombie insists on casting a lot of the same talent, I hope he at least does not continue to cast the same faces in the leading roles.
Zombie uses a lot of symbolism in 31, as he does in all of his work. To fully understand his Hell rides, one must look evil in the face, push aside the masked veil—the façade the Devil hides behind—and see what horrors the mind is capable of spinning. In 31, the Devil is within the rich and powerful, just as he is within—to varying degrees— every one of us puppets; we are all playing a role in Satan’s colossal marionette show, whether we want to or not. Doom-Head says it best: “The unicorn of life shit the magical rainbow and spun an illusion. Life is nothing more than the stinking filthy bone-yard of dead rotting dreams.” The American Dream is an illusion. The dream of freedom is an illusion. The dream of free will is an illusion. The dream of peace is an illusion. Hell, this whole fucked up world is nothing but a mind-fuck illusion. 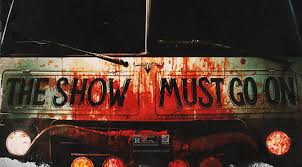